The French Open, or Roland Garros as it’s known, is the most famous clay court tournament in the world. This is the tournament where we got our start in 1987 when we were one of the first companies bringing clients from America to the French Open. Today Championship Tennis Tours brings hundreds of clients each year to the French Open from every corner of the world through individual ticket sales, tour packages and custom packages. There's no event like it, and it's getting only better! 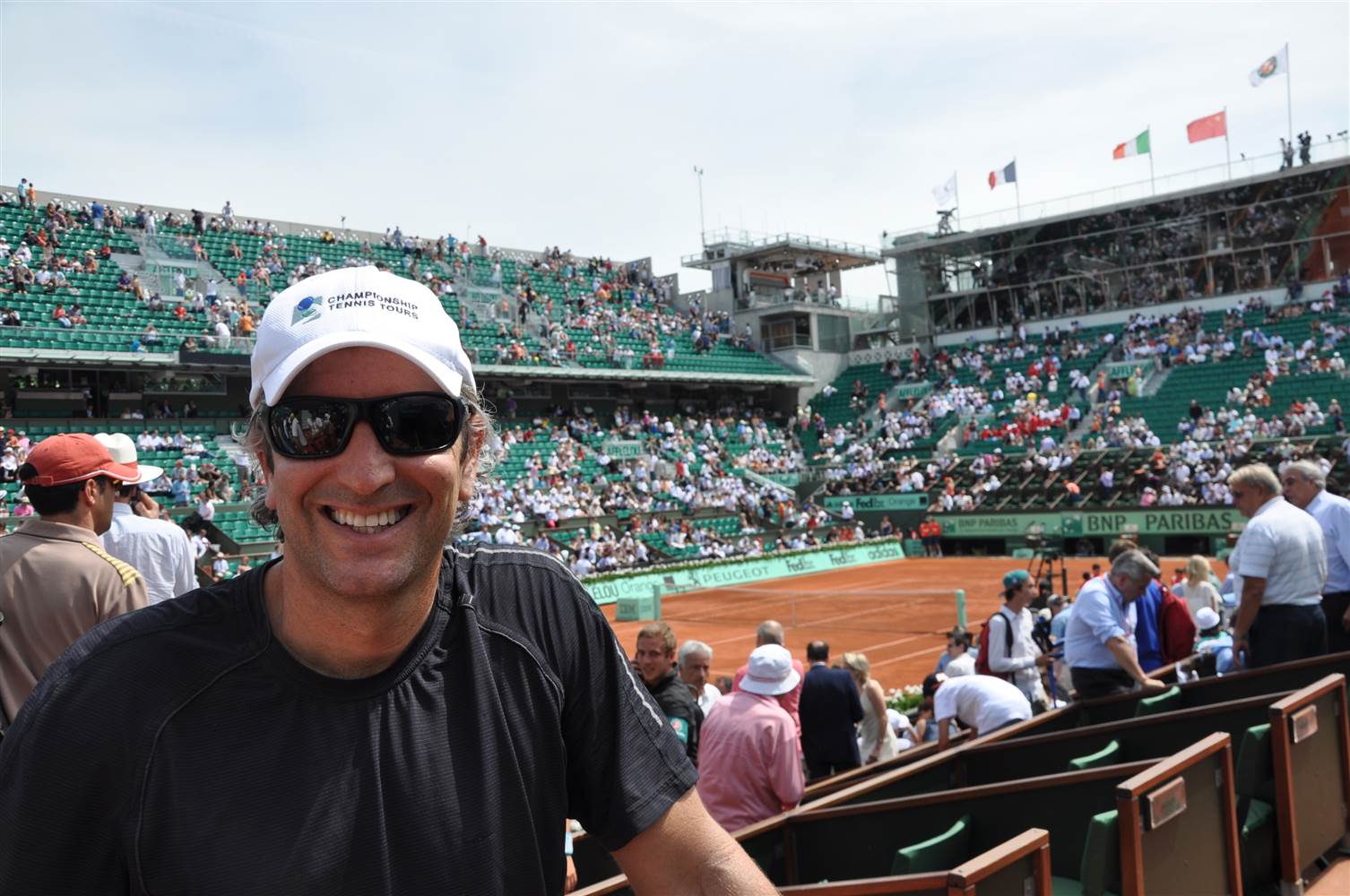 After 10 months of extensive renovations, the new Philippe Chatrier court can seat approximately 15,000 spectators daily. The stadium was redesigned to make it more spacious, modern and comfortable.

The highlight will certainly be the retractable roof that is due to be completed in time for next year's tournament. This means play can continue during rain and starting in 2021, in the evenings.

The seats in the new stands are more comfortable and the court now offers greater visibility to spectators. This year, the players have access to new spaces beneath the stands.

Book reserved tickets on Philippe Chatrier (Center Court). With a reserved ticket on Court Philippe Chatrier Stadium you'll have access to all the outside (annexe) courts except the Suzanne Lenglen and new Simonne-Mathieu show court, both of which will require their own ticket. Tickets are available in each of the four main tribunes: The "Borotra" and "Cochet" tribunes are situated on the west and east sides respectively, and the Brugnon and Lacoste tribunes are situated in the north and south sides respectively.

We offer excellent Philippe Chatrier tickets in the CAT Or, CAT 1, CAT 2 and CAT 3.

"CAT Or" and "CAT 1" tickets are located in the lower bowl of the stadium and begin just above the corporate loge level seats. The CAT Or (or Gold in English) level represents the first 6 rows above the Loge level followed by the CAT 1 leve in the remaining 10-15 rows in the lower bowl of the stadium. l. part of the ickety offer amazing views of the action. In the Lacoste tribune (south side) there are only Category 1 and loge level tickets available. The loge level section is in the first 4 to 12 rows right off the court depending on the tribune. The Presidential Tribune located in the Brugnon tribune is where you'll see the President of the FFT with his guests, notable celebrities, and past Roland Garros champions.  We’re able to secure tickets by special request in the loge level, but expect to pay top dollar for these seats as loge level tickets often come with hospitality.

"CAT 2" tickets are located in the first 10-20 rows of the upper level in the Cochet, Borotra, and Brugnon tribunes.

"CAT 3" tickets are located in the last 6 rows in the Cochet, Borotra, and Brugnon tribunes. These seats are up there, but they still provide good views of the action.

Looking for seats in the shade with the sun at your back?

If you're looking for tickets with the most amount of shade or with the sun at your back, the best tribunes to sit in would be the Lacoste (south side) or Borotra tribune (west side).

View from the Lacoste Tribune (south side): 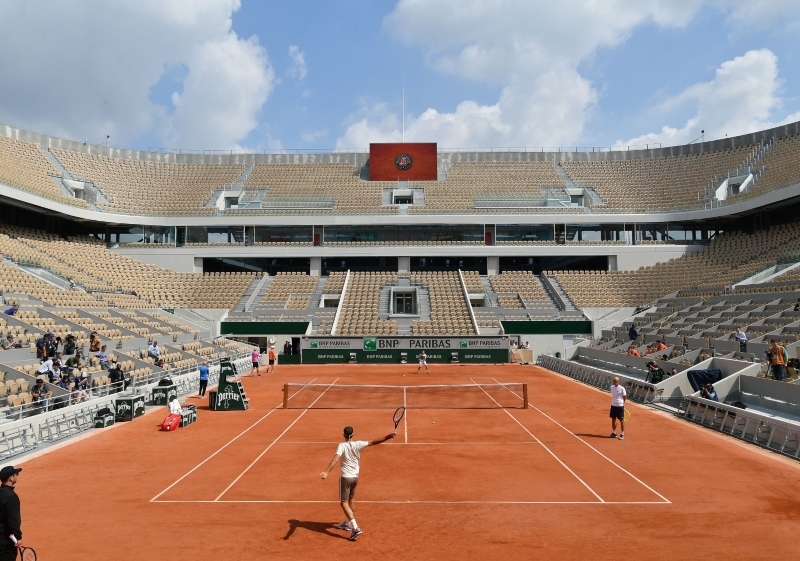 View from the Borotra Tribune (west side): 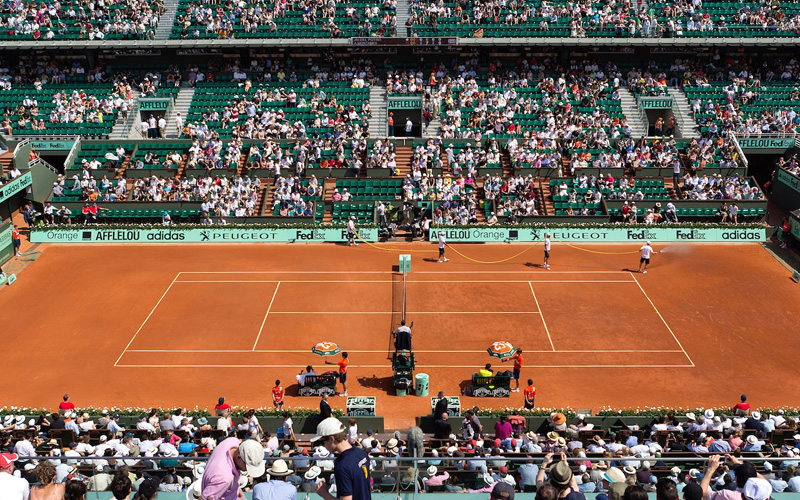 View from the Cochet Tribune (east side): 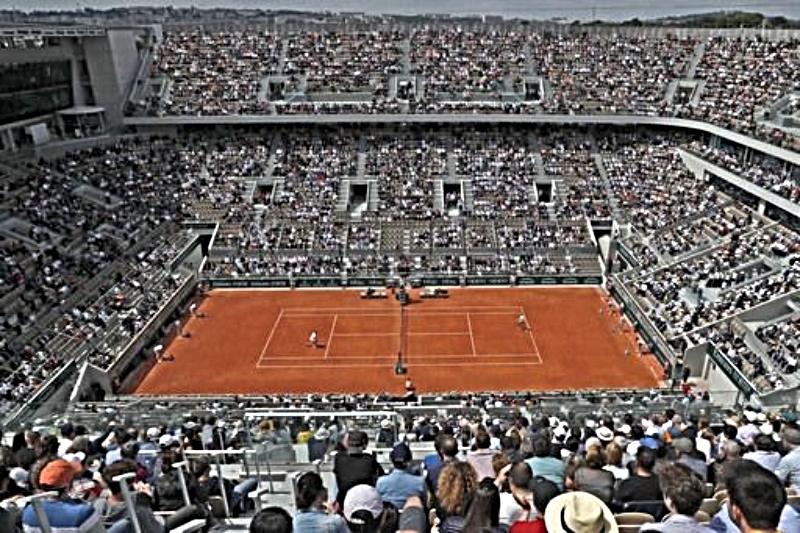 View from the Brugnon Tribune (north side): 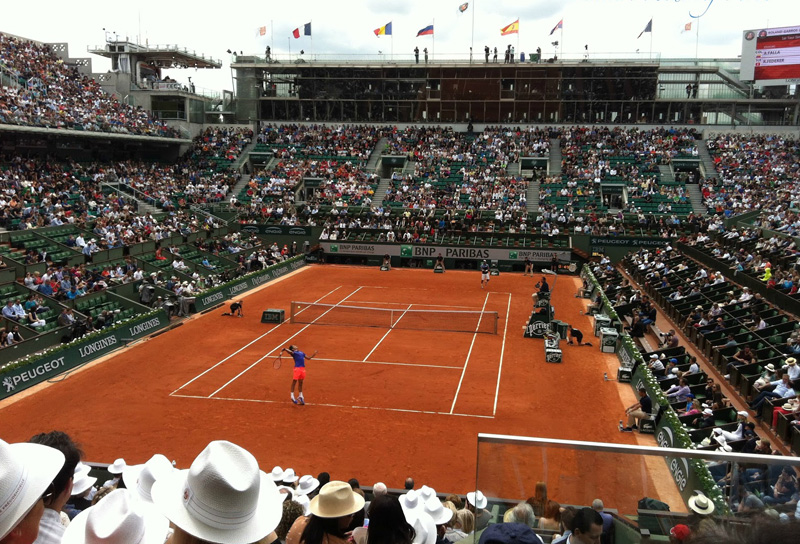 Book reserved tickets for the other main show court “Stade Suzanne Lenglen”.    Although the Stade Suzanne Lenglen is not considered the Center Court where the finals take place, there will still be excellent featured matches through to Wednesday of the second week. If this is your first time to attend the Roland Garros, I would certainly recommend you purchasing tickets on Philippe Chatrier.  If you are going to be attending several days at Roland Garros, then it might make sense to purchase a ticket on Suzanne Lenglen, just so you can check it out. With a reserved ticket on Suzanne Lenglen stadium you'll have access to all the outside (annexe) courts except the Philippe Chatrier Center Court and the new Simonne-Mathieu show court, both of which will require their own ticket. All 10,068 seats inside Suzanne Lenglen have been changed from the former grey plastic to gorgeous Vosges wood built by the French company, Delagrave. They are designed to resist all weather and have given the old stadium, built in 1994, a fresh look. The same Vosge wood seats will be in the newly renovated Philippe Chatrier stadium as well.

Looking for seats in the shade on Suzanne Lengen stadium? 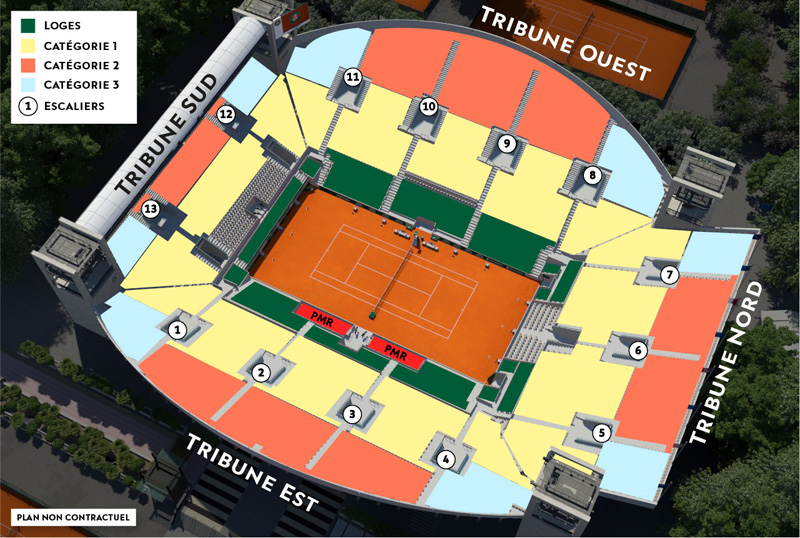 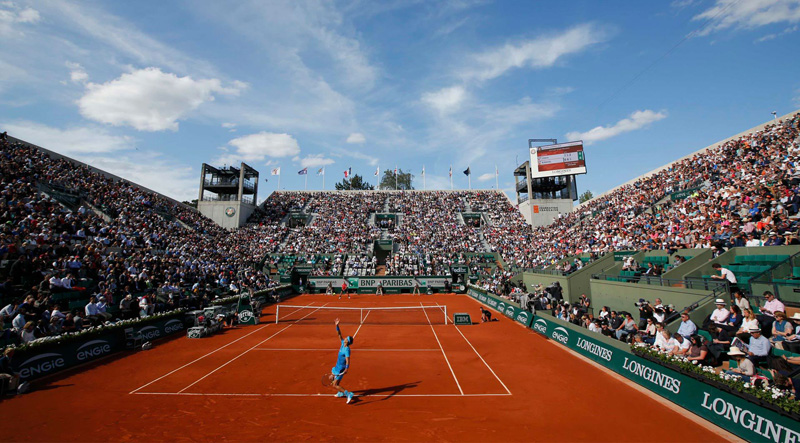 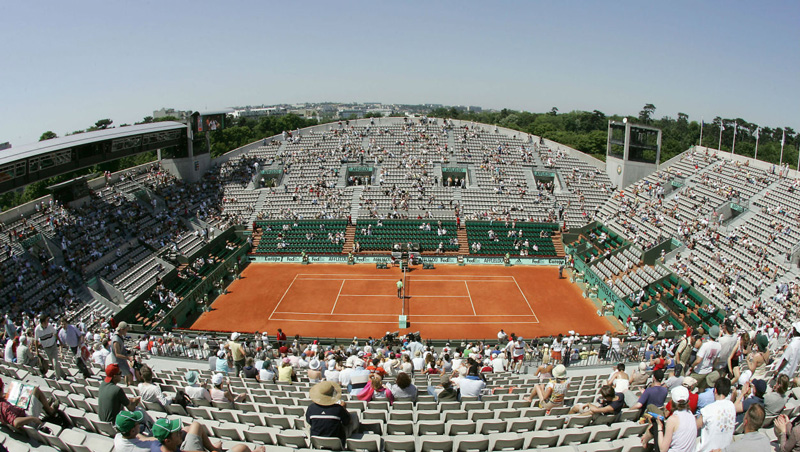 Option 3. Ground Pass or “Annexes” tickets as they're known in French:
These tickets will provide you with seating on a first come first served basis to the annex courts located around the Roland Garros grounds.  For the first week of the tournament, the variety of matches available to watch and lower prices make tickets for the outside courts very popular. With the Grounds or Annexe tickets you will have access to the entirety of the public areas in the Grounds, these tickets allow you to watch the action on almost 20 different courts over the course of the day. 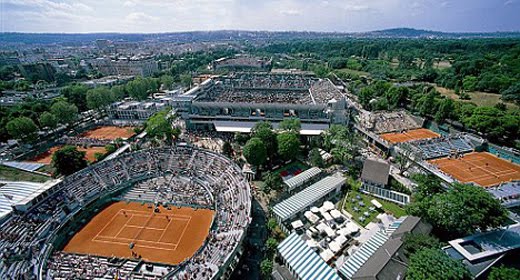 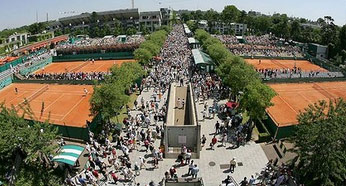 When you enter the grounds from Boulevard d'Auteuil  you will immediately be confronted by the sight of the new "Village," an imposing glass and aluminum building, which offers guests an unmatched and incredible view over the new Courts 7 and 9 from terraces adorned by pine trees. The Village, in addition to a beautiful VIP Hospitality base where corporate clients can host their delighted guests, houses tournament officials, organizers, and the ball boys/girls in the basement.  Situated right in front of the Village, is the new Court 7 which seats up to 1,500 people, while Court 9 can host 550 fans. The real jewel in the crown however is Court 18, a new sunken court on the far west end of the grounds, with seating for 2,200 people. It's the fourth-biggest stadium at Roland Garros and has already created a unique atmosphere.

French Open Tickets are registered and transferred into the name of a specific ticket holder.  We gather that information the names and birthdates of each of the people you are purchasing tickets for at the time of your order.  If you don’t have it available at the time of purchase, you can provide that to us at a later time. The attendees will need to show government issued ID, and the name on it must match the name on the ticket. Reserved tickets in the Philippe Chatrier (Center Court) or the Suzanne Lenglen stadium also give you access to the outside courts, known as the Annex courts. Tickets are all sold by category. 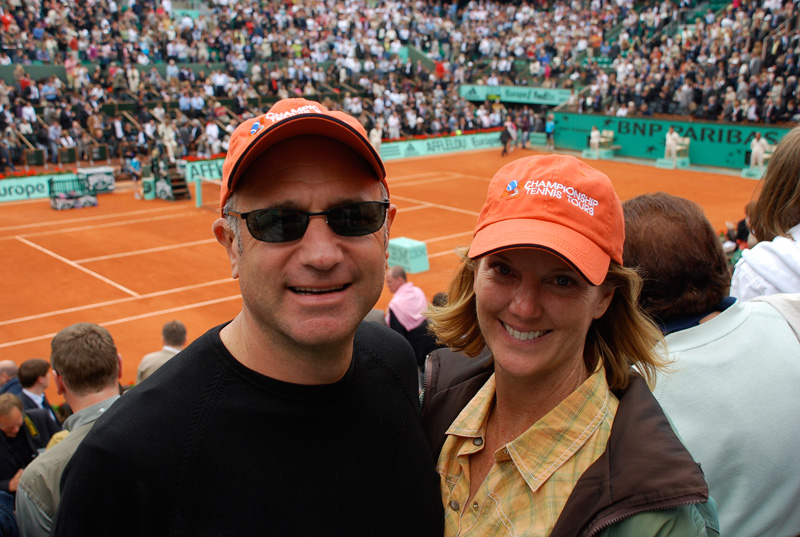 French Open tickets are all in E -Ticket format and are delivered to you via email approximately 1-2 weeks prior to your first date of tennis that you have ordered.

The tournament site is located in the very southwest corner of Paris nestled up against the sprawling Bois de Boulogne park in a neighborhood known as "the 16th". The neighborhood is considered very bourgeois, safe, basically a nice quiet residential area. The end of May to the beginning of June in Paris generally enjoys delightful weather with the highs in the mid 80’s and lows at night in the upper 60's. It's the perfect weather for watching tennis and taking a lovely stroll along the Seine after the action as the lights of the city brings to life with all it's buzzing cafes and amazing restaurants.

Want to see a specific player? Fans often ask us how can they see a specific player, such as Nadal, Federer, Serena, etc"? The simple answer is that we do not know. The Order of Play which tells you who is playing comes out the night before the next days' matches. You can find it on our site. You can also view the draws which show you the possible matchups, but beyond that it's not possible to know for sure.

Getting out to the Tennis: 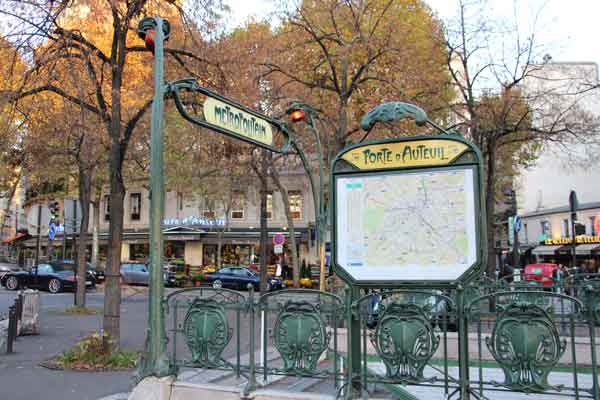 You can obviously take a taxi or private car out to the tennis, but the fastest way considering the traffic in Paris is to take their subway system. The “Metro” as it’s called is by far the best way out to Roland Garros.  It is incredibly efficient and safe.  Depending on where you’re staying in Paris, you’re endpoint will be the Metro station Porte D’auteuil.  If you’re coming from anywhere in the St. Germain area, you’ll take the  #10 line direction Boulogne-Pont de Saint-Cloud.The entrance is only about ¼ a mile from the Porte d’Auteuil metro stop.    As you get off the Metro stop, there are a few cafes just outside the entrance to the metro station where you can sit and enjoy a coffee and croissant, such as the Cafe Marly.  You’ll also find local boulangeries, chinese take out places, and a few grocery stores where you can get water, fruit, chocolate or whatever else you’d like to bring into the tennis with you.  The French tend to get a nice picnic together for their time at the tennis to avoid paying the exorbitant prices inside. Avoid the lines and grab a nice big bag of cherries and a large Evian!

A New Roland Garros is Coming! 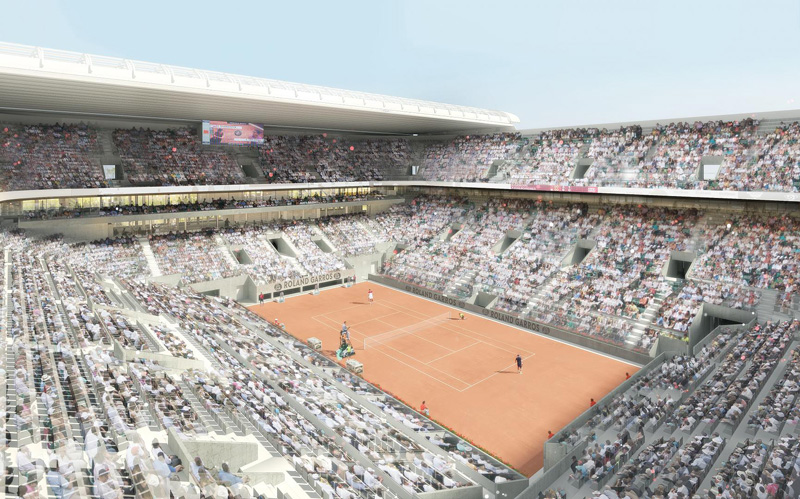 A 350€ million renvovation has begun that will greatly expand the size of the current tournament Roland Garros site. This project includes adding several new show courts, a 5500 seat Simonne-Mathieu show court that will be located in the Botanical Gardens just outside the current grounds. and an almost entire renovation of the famous Phillipe Chatrier Center Court. The new Center Court will feature a roof (or umbrella as they prefer) when it is completed that will be made up of 11 wings of canvas-bound steel —The roof will be ready for the 2020 edition of the tournament and will bring the French Open on par with the other three Grand Slams — the Australian Open, Wimbledon, and U.S. Open all of which have a roof on their main center court. The roof over Philippe Chatrier will not completely seal off the stadium from the elements however. When closed, there will still be a two-meter gap between the cover and the top of the stadium, so if you're in the top seats, theoretically you still could feel a little rain if the wind should be blowing your way. The goal here is that with this" umbrella" on the center court stadium, it will still feel very much like an outdoor stadium even with the roof closed. Night sessions are scheduled to start at the French Open in 2021 edition with LED lights being installed eventually on all the courts on retractable poles that will slowly rise from the ground as night falls and then return to earth during the day.