Please select up to three featured properties below: Read more
Drag hotels to change their order

No information here yet.
Complete Checkout

We’ve done our best to select the finest hotels for each star level in this amazing city. No longer the city called “New York…without all the stuff”, Toronto is fast-establishing itself as one of the world’s most desirable destinations, with a creative counter-culture rivaling the likes of Williamsburg and Copenhagen. In Toronto, you can find fantastic restaurants featuring food from almost any point on the compass.

All of our three star properties we've picked offer an hotel experience for the money, combining a high level of comfort, amenities, and their location in the best areas of Toronto, all within minutes of the action at the Aviva center.

Here are the three star properties we feature (View Hotels on Map):

Location:
Distance to Aviva Center, site of the Rogers Cup: 5 - 10 minutes by car.

All of our four star properties we've picked offer an hotel experience for the money, combining a high level of comfort, amenities, and their location in the best areas of Toronto, all within minutes of the action at the Aviva center.

Here are the four star properties we feature (View Hotels on Map):

Location:
Distance to Aviva center, site of the Rogers Cup: 5 - 10 minutes by car.

All of our five star properties we've picked offer an hotel experience for the money, combining a high level of comfort, amenities, and their location in the best areas of Toronto, all within minutes of the action at the Aviva center.

Here are the five star properties we feature (View Hotels on Map):

Location:
Distance to Aviva center, site of the Rogers Cup: 5 - 10 minutes by car.

Your tickets allow you to attend matches on all the side courts.


Rogers Cup presented by National Bank is a prestigious professional tennis tournament organized by Tennis Canada. Since 1881 for the men and 1892 for the women, the best players in the world have showcased their skills on Canadian courts. Only Wimbledon and the US Open have longer histories than this major Canadian stop, which is acknowledged by the tennis world to be one of the best-run tournaments on the Tour. Classified as a Premier 5 event on the WTA calendar, Rogers Cup presented by National Bank offers over US $3 million in prize money and attracts the biggest stars in tennis year after year.

Montreal and Toronto share the task of hosting the best men’s and women’s players in the world, with both tournaments played at the same time, during the same week. So, from August 3-12, 2018, the women will be in Montreal while the men will play in Toronto.

The impressive list of past champions for this Canadian stop on the professional tennis circuit includes such legendary names as Serena Williams, Martina Navratilova, Chris Evert, Monica Seles, and Steffi Graf.

Q . What is the address of the Aviva Center in Toronto?
1 Shoreham Dr, North York

Q. What if my tickets are lost or stolen?
When you receive your tickets, keep them in a safe place. Unfortunately, tickets cannot be replaced if they are lost, stolen, or damaged. Please note that direct sunlight or heat can damage some tickets.

When a ticket is listed as a “General” ticket, such as Promenade General, or “CAT 1 - General” this simply means that your tickets are guaranteed to be located in a section within that given level. Even though it’s listed as “General”, all tickets are reserved. You will only know the actual seats (section, row, and seat number) once the tickets are delivered.

Q. What does my ticket entitle me to?

For the main draw, we sell tickets for reserved Centre Court seats only. Your ticket also allows access to the grounds and all matches on other courts including Grandstand Court during the session your ticket is valid for, however this seating is unreserved.

Q . How many seats are in the Aviva Centre in Toronto?

Q. Where does the Umpire and Players sit?

They sit on the west side facing east.

Q. What are some tennis etiquette' rules that fans must abide by while watching matches at the National Bank (WTA) Toronto presented by National Bank?


Q. What session or day is the best to attend?

Every fan finds a different day or session to his or her liking. There are more matches earlier in the week and during matinee sessions. As the week progresses, the excitement builds as the field narrows and the remaining players fight to become the next National Bank (WTA) Toronto presented by National Bank Champion.

Q. Can I buy a ticket to watch a particular player?

The National Bank (WTA) Toronto presented by National Bank is an elimination tennis tournament, and as such the schedule of play is determined each evening for the following day. Therefore, it is not possible to purchase tickets in advance and guarantee a specific player will play in that session.


Q. When does the official draw come out?

The official draw is created the weekend prior to the start of the main draw. The players' names are randomly selected and placed on the official drawboard, with the top 16 seeds already placed on the board after receiving a bye in the first round. Once the draw is determined, the schedule of play is made daily by the tournament director, tournament referee and ATP World Tour Director. Please check rogerscup.com nightly throughout the tournament for the next day's schedule of play.

Q. If I don't want to be looking into the sun, or would like to sit in the shade, where would be the best place to sit?

During the matinee session the sun is almost directly overhead and there is no shade. During the evening session while the sun is setting the preference is to sit on the west side facing east. The Rexall Centre is an outdoor stadium so remember to bring your sunscreen and a hat as temperatures can get very hot.

Q. What does my ticket entitle me to?
Your ticket also allows access to matches on other courts including the Grandstand during the session your ticket is valid for, however this seating is unreserved.

Q. How many matches will I see with my ticket?
From Monday through Friday, there will be a minimum of three matches scheduled on Centre Court in the matinee session and a minimum of two matches scheduled in the evening session. Inclement weather and other factors beyond our control may alter this schedule. Both singles and doubles matches are included in most sessions.

Q. What time can I come to watch my session of tennis?
You may enter the site for your session according to the gate time printed on your ticket. Typically, the gates open one to two hours prior to the start of the first match. For example, the Thursday Matinee session gates open at 10:00 a.m. and the matches start at 11:00 a.m. while Thursday Evening session gates open at 5:30 p.m. and the matches start at 7:00 p.m.

Q. Can I bring a camera?
Cameras are allowed to be brought on site, no flash photography is allowed while play is in session. Tripods, monopods, camcorders, laptops and ipads are not allowed. If found at the gate, you will be asked to return these items to your vehicle before entry is permitted. We ask that photographs at Centre Court only be taken from your seat or behind the railing, and that it not interfere with any other guest's enjoyment of the match.


Q. What am I allowed to bring to the tournament?

Allowed Items:
Clear Plastic Bottles
Food and water as long as it abides by the above prohibited items list
Small Personal Coolers
Cameras are allowed on site as long as the following two rules are followed:

Laptops, tablets and other handheld electronic devices are allowed on site, however their use within the confines (spectator area) of the tournament match courts is prohibited.

Your National Bank (WTA) Toronto package contents are delivered by FedEx a few weeks before your first day of attendance at the tournament.


Since 1987, we have had just one mission, and that's to make it as easy as possible for thousands of fans each year to attend the most sought after tennis tournaments in the world. We handle only tennis and have deep experience and understanding of the tournaments we service. You can trust us to take care of all the details, with a level of customer service that will make you a loyal client for years to come. 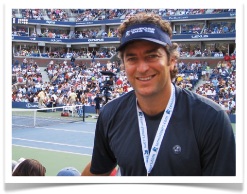